As I sit here typing this I can’t help thinking how Anakin Skywalker would feel about his family now…what his actions have caused. Don’t even get me started on Padme…I wish her character was still alive to see what had happened.

Anyway that’s not what I’m gonna talk about, today I’m here to talk about The Force Awakens!

First of all I love John Boyega and Daisy Ridley, they are such a great addition. I’m really glad they casted them. 😀 Here’s a quick vid I did then continue reading 😉

The character Finn (played by John) is scared, confused, and just wants to get away from the dark side (yes he is funny too). On the other hand Rey (Daisy) is waiting for her family to come back for her. With a twist of events they both team up and fight the dark side. Alongside BB-8 (whom I love so much) 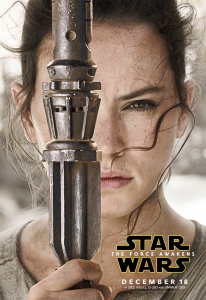 Personally I really enjoyed the whole story line. It has classic elements we love from episodes 4,5, 6, and a bit from 3. But at the same time it introduces new characters with different backgrounds and I love how they tied some of the characters’ backgrounds with the original characters.

I hope the 8th episode we discover more of what happened after episode 6 but before episode 7 (does that make sense?).

Like I mentioned earlier, if Anakin would see his family now and how his decisions have ruined things…he would definitely feel guilty (thank goodness he kinda recognized that before he died -_- ) And Padme would straight up slap Anakin if she had the chance, I think she would be sad seeing her kids having to deal with all this stuff and the people that help them too, but I think she would also be extremely proud of Luke and Leia for being such bad-a. 😉

Alrighty so that was my review (non spoiler) of The Force Awkens, believe me if it was spoiler this would be never ending (I’ll prob film a spoiler video soon).

That’s all for today folks 😀 Thanks for reading!