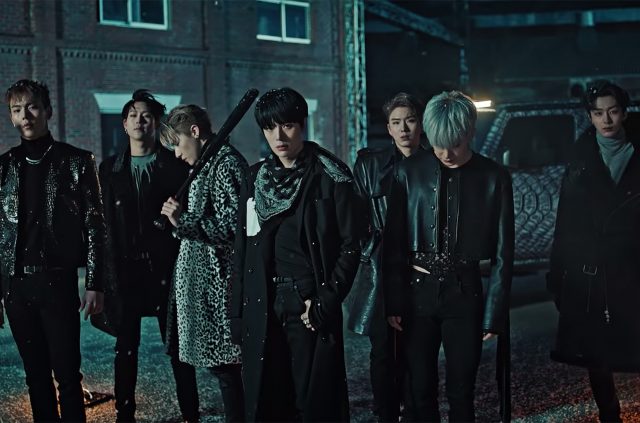 It’s amazing to see how much Monsta X merchandise I see in Hot Topic. Whatever they did during Jingle Ball, they’ve definitely gained some popularity in the States.

They just released a brand new album, and I will be sharing with you all my thoughts on each of the songs.

INTRO: We Are Here

This song sets the tone for the rest of the album and it gets you pumped for the upcoming songs.

When I first found out the title track was called, Alligator, I wondered what kind of song could have that kind of title. However when I watched the music video I thought it was a cool concept and the whole alligator thing was unique. Just like their previous mvs they continued with the dark theme. Love it.

Yes, I did a reaction to it too.

Not bad. The vocals are really good. Monsta X is known for insane rapping but I think their vocal line is just as good. I think it would be cool to see an mv of this song.

I didn’t need to see the title of this track to instantly know this was the song they collaborated with Steve Aoki. It has a heavy dance/EDM sound. I’m sure DJs will get a kick out of this track. Many fans complained how different this song is to all the other Monsta X songs. But personally, I think it’s good for groups to experiment and try new things. I’m glad they did this collab and I hope they’ll do more in the future.

The harmonies and the song’s melody are wonderful. This is one of my fav tracks. I think it’s awesome how Wonho was given the liberty to create this song. It’s absolutely beautiful.

Alright, now we get back to the heavier stuff Monsta X is known for. The strong base with an equally strong build up in the pre-chorus leads to an awesome chorus. Definitely a bop.

This song has a heavy hip-hop sound. The vocals, the beat and the rap work together to create what I would call a ‘hard-hitting’ track. There’s a bit of confusion with the lyrics. Many fans are questioning what the group means by them. If the translations are correct and if it is what half of the world thinks it is… then this song is probably for 18+. But with many Kpop songs, the groups rarely dive deep into the meanings behind them. So we may never know.

I instantly loved this song when I heard the guitar within the first few seconds. It has components dance and some EDM, but it still holds the element of hip-hop. It’s easily one of the most addicting songs in the album so far. The chorus is absolutely catchy and when you hear it, trust me, you can’t help but dance and jam out to it. One of my favorite songs in the album.

*I wish this was the title track…just sayin.

The pre-chorus reminds me of some older (senior) Kpop groups. It has repetitive lyrics which makes the song easy to jam to. I would say this has a heavy dance/electronic sound to it. But it still maintains the rough sound from Monsta X. I would like to see a choreography to this song (I should search that up).

A bit slower with some R&B vibes. Another song that is easy to bop to. The guitar and the beat flow well with the vocals and the rap sections. This too, is also one of my favorite tracks.

Overall this album holds familiar elements and sounds from Monsta X’s previous albums. But I’m glad to hear some songs that are slightly different. I believe the last five songs on the album are some of the strongest. Personally, like I mentioned earlier, I would’ve preferred to hear one of those songs as a title track with its corresponding mv.

I enjoyed how this album is a continuation to “Take 1 Are You There?” Love continuity in concepts! Good job Monsta X and their team for a well made album. Also, I would like to congratulate them for coming to the U.S. and taking the Jingle Ball by storm.

I’m excited to see how their popularity grows in the States and overall around the world.